Hiya, how are you? How’s everything? Working from home? Furloughed? Bored? All of the above? It’s all a bit crazy right now isn’t it? I admit I’ve been somewhat AWOL from day to day life in general for the last. ooooo it’s easily 6 months but I stopped counting to be honest. I haven’t put pen to paper or fingers to keyboard to write anything more meaningful than a shopping list really.

You see, before all this Covid-19 stuff happened I had been taking care of my parents. This is hard to write so bear with me. In May last year Dad was diagnosed with a degenerative heart condition and Amyloidosis. We travelled to Royal Free in London for more intensive tests and though the news wasn’t good we were grateful that it was the ‘good’ kind of Amyloidosis and not the cancerous type.

In September he found a lump in his neck. In November it was diagnosed as cancer. He swiftly had his tonsils removed and made a remarkably fast recovery (tough as old boots is our Pops). Unfortunately, and as a result of the op he lost his taste buds and it all went downhill from there. He ended up getting admitted on New Years Eve so as everyone else was popping champagne corks and partying we were sat at dads bedside as he was placed on a drip. He stayed in until the end of the first week of January and I swear I have never seen or heard a man negotiate his way out of any situation as smoothly as my dad did out of that hospital bed!

Then we had more bad news. What we thought was a small tumour that had been removed had escalated into his lymph nodes in his neck, and basically exploded (I’m sure there’s a medical term but it escapes me). This meant a Right Selective Neck Dissection. Basically everything removed from the right side of his neck and Radiotherapy. 33 treatments over 6 and half weeks. Every week day for 6 and a half weeks.

Though I’m an only child and we are a small family, Pops is very popular! Sooo many people stepped forward to support and help us. I took the bulk of the care on myself, knowing that I had the amazing support of my husband and son behind me. And so it began, and everything else stopped. I dropped out of WhatsApp groups, pulled my close circle of friends in closer and shut everything and everyone else out – including writing. How the hell could I write with all this going on?

Before all this happened I had written my first crime thriller. it was nowhere near finished and needed a lot of work but I HAD A PLAN! I would start editing in the new year, send out to beta readers at the beginning of Feb ’20, hire an editor in March, run through final edits in April and get ready to upload to Kindle at the beginning of May, June at the latest.

HAHAHAHAHA, oh you naive fool you. Of course it wasn’t going to go to plan – nothing ever does! Hell, dads treatment finished on 11th March and I’ve only just found my way back into the Shed of Words. And I haven’t even started to have a read-through of my book.

But one thing we all have right now is time. How we spend that time is absolutely, one hundred percent down to us (unless you have kids, work, a dog, a window to gaze out of). i’ve been loafing about like a forgotten thing, wandering from room to room like the proverbial lost sheep, looking forlornly at the outside world wondering when I’d be ready to take part in it again. Every news broadcast brings more bad news, anxiety levels are off the scale. It was easier to sit on the sofa in despair than face the new reality that was going on. I stupidly offered to do the food shopping once. Wow, if that wasn’t a reason to run and hide away I don’t know what was – there was a guy in a full blown WW2 gas mask, I kid you not!

And of course all those true crime shows to watch, cos that’s going to lift me out of the doldrums isn’t it? (It did actually.)

So what changed? What finally ‘broke’ me? Well it was this tweet actually.

It sounds simple. It IS simple. I just needed to get off my arse and sit in the Shed. I knew that if I sat there long enough I would produce something – even a crappy blog post about why I wasn’t writing. And guess what? I decided on Good Friday, after seeing that tweet, that enough was enough. I had to get a grip. I had a job to do and whilst it isn’t saving lives, it’s important to me. So after Bank Holiday Monday I woke early, jumped in a shower, dressed (in actual clothes with a bra and everything), did my hair and made it into the Shed. By lunchtime I had a blog plan, a writing plan and had even picked up my book (though I had to blow a few cobwebs away!).

And how do i feel – AMAZING! By the time I had finished yesterday i was buzzing. I had new short story ideas, I had new character ideas, a brand new idea for a series of books… so many ideas.

So I’m back. I’m writing, I’m perfecting my craft, practicing my art, filling my time constructively and it’s the best thing I could ever have done for my mental health. So in future when someone asks me why I write I’ll loftily reply “Because when life was shit, words saved me.”

Dads fine by the way, or at least well on the road to recovery and getting stronger everyday. Here he is ringing that bloody bell! 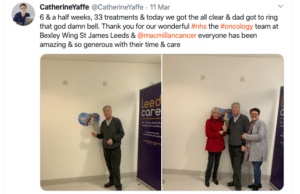