Way back in 2012 my boyfriend (as he was then) and I came across a Facebook page that had the most beautiful croft Bed & Breakfast in the remote location of South Erradale, Gairloch, Wester Ross (it has since closed).

Wester Ross is located in the Northwest Highlands of Scotland and is steeped in history. All across the landscape, there are hints to the past; old croft buildings, disused roads and monuments harking back to days when the area was so remote it was utterly self-reliant on its own industries.

At the time Croft 23 was owned by Mark and Jan, two wonderful hosts who had migrated to Scotland from England a few years before. We intended to use Croft 23 as our base and explore the surrounding area. We had done our research, and with the help of Jan’s extensive knowledge, we were excited and keen to get our walking boots on and go off on our own adventures.

We weren’t disappointed. Every corner we drove around revealed a new landscape that took our breaths away and literally had us saying “Wow” every few minutes.

One of our very first walks was across Slagain. The path runs alongside Loch Slagain and leads past a deserted village. There was no one around but Highland cows and what appeared to be a graveyard for empty tin baths! At the very end of the walk, we were rewarded with a white sandy beach and water that was of the colour you would only expect to see in the Caribbean. This was our very first walk, and I can remember it as clearly as if we were there yesterday. 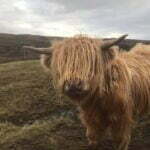 For the last eight years, we’ve been going back maybe once or twice a year (including doing the North Coast 500 in a 1970’s campervan!).

In 2016 we ‘eloped’ to get married in Greta Green, and naturally the next day we headed further north to our spiritual home.

Our most absolute favourite place is Mellon Udrigle. More often than not the beach is deserted, and the waves beckon you in (in wellies of course.) We wander over to the hillside and sit on the edge of the rocks watching the waves break and letting go of all our f*cks. It’s so inspiring and the air is so clean and fresh. In fact, after our wedding it was the first place we headed and I placed our flowers in a little heart of rocks and though the flowers had gone the following year (obviously) the heart was still there ♥️ 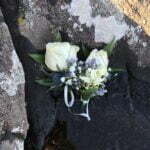 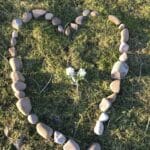 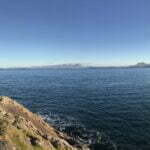 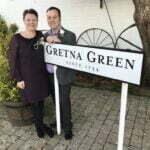 We love it up there so much that in 2019 we put an offer in a beautiful little house overlooking Gairloch beach. I had dreams of using it as a writing retreat, disappearing for a couple of months at a time, fresh water swimming everyday and developing plots whilst sat on the isolated shores. For one reason or another, it didn’t happen ( I was gutted). I guess it wasn’t our time, but once this whole lockdown is over I can guarantee we will be back there – despite the 9-hour drive!

Anyway, back to the book!

When I first starting writing The Lie She Told, it was a very different book to the one I’ve ended up with (read more about that here). I was inspired to set it in Gairloch as, of course, I love it up there, but it always struck me as the perfect place to run away to. Somewhere remote but close enough to civilisation to live a relatively normal but secluded life. I imagined living in time with the seasons, being reborn in spring after the long arduous winter, revelling in the glorious (if few) sunny days on sandy white beaches with teal coloured waves and hunkering down for autumn with log burning stoves and watching the ever-changing landscape. It just really caught my imagination, and what’s more writing about it made me feel like I was there again.

There’s a scene in the book where Kate picks up a stranger on the side of the road during a storm and a few of beta readers commented asking if a lone female would actually do this and the answer is Yes – well it certainly was true when we started visiting and we’ve given people lifts into the village so it’s not outside the realms of possibility. That’s how generous the local community is. We have never been anything other than welcomed with opened arms and true Scottish hospitality. We make sure we shop local where we can rather than using the big supermarket in Dingwall, and we take time to visit local markets, and our favourite cafe in Poolewe – The Bridge Cottage Cafe (if you get a chance to visit you must try the hot chocolate and homemade cakes.)

The majority of the book is set around Gairloch Harbour, which is still a full working harbour today. The seal that’s mentioned in the opening pages is real and we’ve seen him on quite a few occasions! The harbour side cafe is a lovely little quirky place and a perfect place to stop after a long day walking or exploring nearby. It has changed hands several times during our trips up there and though I have never had any inclination to own a cafe it was whilst sitting there one day that the ‘hook’ for The Lie She Told hit me. What if you had to start your life again? Wouldn’t running to the Scottish Highlands and taking over a cafe be an ideal place? By the time we left Scotland 3 days later I had the whole book figured out! 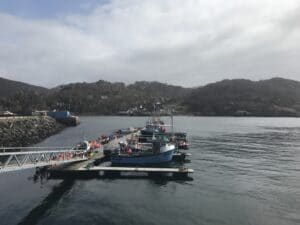 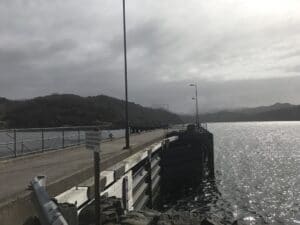 So that’s a little background to the setting for The Lie She Told and I hope it’s given you an understanding of why I set it there, and how much I love the area so much.

Oh gosh, there’s so much more I can say and I haven’t even started to describe Flowerdale Falls! Beautiful if not a more difficult walk due to the undulating paths and steep inclines (I couldn’t walk for a week after this particular adventure, flat surfaces only!)

If you do get chance to visit the Highlands of Scotland then make Wester Ross a stop off point on your trip. It is the start of the North Coast 500 but I’d recommend getting off the beaten track and making your own adventures!

If you would like to download the first 2 chapters of The Lie She Told (out in October 2020) then follow this link and choose your preferred option >> https://landing.mailerlite.com/webforms/landing/v7z7t8