WHAT IS CRIMEFEST/HISTORY (Official blurb taken from crimefest.com)
CRIMEFEST is a convention for people who like to read an occasional crime novel as well as for die-hard fanatics. Drawing top crime novelists, readers, editors, publishers and reviewers from around the world, it gives all delegates the opportunity to celebrate the genre in a friendly, informal and inclusive atmosphere.

The CRIMEFEST programme consists of interviews with its featured and highlighted guest authors; over forty panels with more than a hundred participating authors; a gala awards dinner; and one or two surprises.

CRIMEFEST was created following the hugely successful one-off visit to Bristol in 2006 of the American Left Coast Crime convention. The British hosts were encouraged to continue with a similar annual event and, as a result, the first CRIMEFEST was organised in June 2008. The convention has grown to become not only one of the biggest crime fiction events in Europe, but also one of the most popular dates in the international crime fiction calendar. 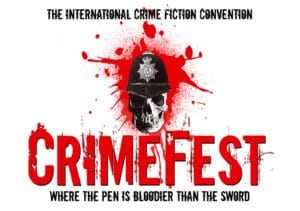 It was the first crime writing event I’ve ever attended, let alone the much lauded CrimeFest and it was my first foray from home, alone, since 2019. I was nervous. I remember finishing chemo and declaring to the husband that I was a ‘YES’ for everything. I was going everywhere and CrimeFest was the very first thing on my list. I booked for the entire weekend, chose to stay in the event hotel and drove the 3.5 hours down to Bristol on the Wednesday evening, ahead of kick off on Thursday afternoon.

I needn’t have been nervous. I have never been to an event where I was greeted with such kindness and warmth. Without exception, everyone was welcoming and inclusive and I instantly felt like I’d known everyone for years! Of course, put writers and readers into a room together and I dare say that was always bound to happen, but it was so good to find out more about my fellow attendees with no hidden agenda (I’ve spent far too long in the corporate world where these kind of events would ultimately lead to ‘buy my stuff’) other than our mutual love of words. 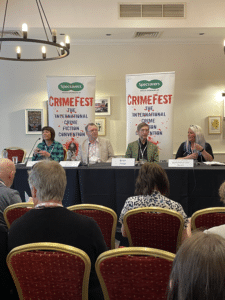 I attended two of the sessions on Thursday, Bubbling Under: Creating Tension was the first. It was an excellent, very knowledgable panel and it was great to see a familiar face. Brian Price and I had met albeit virtually at a workshop he was running with Graham Bartlett. He is the absolute expert on making writing about crime scientifically credible, and I have ‘used’ various methods in my own books! He is a crime writer in his own right now, having written two thrillers Fatal Trade and Fatal Hate.

The second event was Ticking Clocks: Is Crime Fiction A Race Against Time? As the title suggests, it was debated whether the ticking clock element of a crime novel is something that readers appreciate. Does it add tension? Is it necessary? As a writer myself, it isn’t a technique I have used (so far) but I can absolutely see the merits in doing so. Steve Cavanagh of Thirteen, Eddie Flynn fame concluded that he would use it as a cliff hanger to keep the reader turning the pages, and after reading everything he’s written I can tell you he uses it to the best effect.

Throughout Friday, the panels continued and it was all pretty intense. I managed to meet up with my editor, Rebecca Millar which was lovely and we managed a very quick catch up in between afternoon sessions. 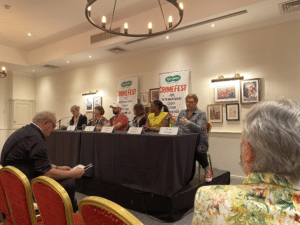 great to see them in the flesh. Karen Robinson was moderator, and asked the questions I would have asked! Each talked about their journey into publishing, which was varied, and I bravely asked the question – If you had a choice, would you go through the process again or self publish. As many writers feel, their job and passion is to write the best they can, the marketing and publicity eats into that time so from that point of view yes, they would but there was also a feeling of having lost a little bit of control regarding elements such as cover and editorial changes. I found this really interesting as a proudly self published author but more on that later.

I was equally delighted to meet other authors that Rebecca has worked with, none other than Simon McCleave who was on Saturday’s panel for It’s A Fair Cop: Writing The Modern Police Procedural. This panel was moderated by Helen Fields whose book One For Sorrow I have just finished so I was excited to meet both. This was my favourite panel of the day. Helen was hilarious, and really coaxed the best out of the panel (I count listening to Helen having to explain Snog, Marry, Avoid to Jorn Lier Horst as one of my festival highlights!).

Saturday was also the gala dinner, which unfortunately I wasn’t able to attend. I’m still having to manage my energy levels and I knew it would involve alcohol and late night so I sneaked off to my room with snacks to watch Eurovision! 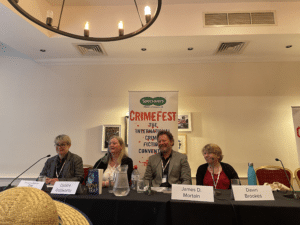 Sunday, the final day. There was only one panel for me that day – The Indie Alternative featuring Dawn Brookes, Caroline Goldsworthy, and James Mortain, moderated by Zoe Sharp. A couple of writers had to drop out (Covid) but the remaining panelists were excellent;  and clearly knew their stuff. The stand out takeaway for me was how much we self-published authors enjoy having control over what we’re producing. It’s definitely one of the reasons I stay in that lane. Also, the wheels of trad publishing work irritatingly slow – again, us control freaks were not down for that length of wait. This is in spite of the fact that it was felt that to gain any kind of momentum in sales, ideally you need to be publishing every 3 months, for various reasons. To keep your readers interested of course but much of it is down to Amazon and it’s algorithm. It proactively promotes new books for at least 30 days, then over time if sales don’t increase or at least maintain the launch pace it drops off. It’s well known that there’s a 3 month ‘falling off a cliff’ period where if you don’t step in with well placed adverts, your book will gradually fall down the ranks and the sales will stop. 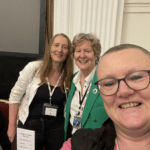 I also managed to have a quick chat with other self publishing hero’s A. A. Abbott and Alison Morton 😀

Overall it highlighted to me that to be a successful self-published author, akin to L J Ross who has sold over 7 million books in 7 years, then you have to be at least competent in marketing, accountancy, publicity, SEO. But at the crux of everything you have to be able to write books that keep readers hooked and wanting more.

All in all, I thoroughly enjoyed my weekend immersed in Crime, I spent far too much on signed copies of books that I already have on my Kindle but one for certain – I will be there again next year!

Huge thanks to the amazing team at Crime Writers Association for organising such a fantastic event.