It’s been four weeks since The Lie She Told started landing into peoples hands and I can tell you that it’s been a rollercoaster of a ride! I always knew that self-publishing wasn’t for the faint hearted. I saw it / see it as very much a marathon and not a sprint – at least that’s what I told myself.

It’s probably easier to follow if I break it down step by step so you can see how much work is involved.

1 Week before launch
I checked the final copy of the paperback and hit Publish on the Amazon dashboard.
It can take up to 72 hours for the physical book to be made available as a buy option on Amazon so I wanted to ensure it was ready ahead of time. I hit a slight snag in that the book description didn’t update (they’re manually checked by Amazon) so it sat with the outdated description for the first 48 hours but I doubt that affected sales.

Day of launch – 1st October 2020
I didn’t sleep the night before knowing that the pre-orders for the eBook would be sent, and I had also sent a newsletter to my subscribers just after midnight, depending on where they were in the world. Throughout the day I continually hit refresh on the Amazon sales dashboard – BIG MISTAKE! Not for vanity reasons, the sales were going well but for the anxiety factor. I was overly tired, very emotional, stressed and I had the virtual launch to do that night. I felt drunk I was so tired so the husband sent me to have a nap in the afternoon!

Night of the launch 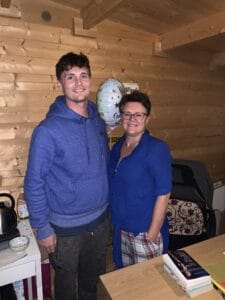 I woke up feeling refreshed and raring to go. I don’t have any issues with live broadcasts etc but for some reason I was anxious about this one. My son and his fiancee turned up about an hour before with champagne and flowers which settled me down and they reassured me that people tuning in were on my side! And I had an absolute blast! All the people who I hadn’t seen for months (thanks Covid) were there and it was just like chatting with friends. I gave away free copies, someone won the chance to be in the next book and we had such a laugh! Phew, it was over – The Lie She Told was officially launched.

2nd October 2020
The reviews started to land on Amazon. Again, I hit a snag. Each review is manually checked by someone so it took ages for them to start showing. If I was ever going to hit my goal (#1 best seller) then I knew I needed to have as many verified purchased reviews as possible. Didn’t happen but that was fine. I already had over 20 on GoodReads thanks to the advance reader copies (I used Voracious Readers – amazing & highly recommend). I was happy with that.

Did I hit #1? No, but as the wise one said (the husband) I do set myself massive goals! I did hit the Top 500, later rising to the Top 400 and over time I’ve reached the dizzy heights of the Top 300. I have to be realistic, I was NEVER going to hit the top spot with my first book. If you look at the amount of books that are in the Crime / Thriller category then you’ll see how much competition there is!

But here’s what did happen;

⭐️  Had over 40 5 star reviews across GoodReads & Amazon

✅  Generated a reach of over 100k with blog reviews

I’ve been interviewed on the UK Crime Book Club page, The Writing Community Chat Show and appeared in the UK True Crime podcast as well as a few others.

The Marketing!
Wow – there’s a lot to think about – bear in mind it’s just me, I don’t have a team behind me so every image, post, status update, email newsletter has to be carefully thought through and planned.

I used tools such as StoryOrigin and Bookfunnel to build my email list, and I already had a few subscribers from my time in digital marketing so I wasn’t starting with a blank slate but I also didn’t want to spam the life out of people. I sent my usual monthly newsletter ‘What Cat Did Next’ then one a week during October as we built to launch.

Of course, I sent another after the event to follow up on those who might not have seen it (except Mailerlite threw a fit that day and the same email went out 3 times!! No one unsubscribed thankfully).

Across social media I created a range of 20 separate images for each platform. Some showed the reviews, some were just the book and links, others had snippets from the book itself. I did this on Canva which was time consuming but now I know which images / text had the most effect I probably won’t do as many for the next book.

I also took part in a blog tour – up to 30 bloggers received advance copies then reviewed the book on their blogs. This worked extremely well and helped with SEO, reach and sales. Definitely something I will do again.

The Sales
As it stands today I have sold over 300 copies, a mix of eBooks and paperbacks which personally I don’t think is too bad (marathon not a sprint). The one thing that really helps with sales is word of mouth. People independently talking about your book to family and friends, personal recommendations.

The one thing I didn’t account for was the request for signed copies. I don’t know why, I just never gave it a thought but I was inundated with requests so I had to figure out a way of doing it.
Amazon offer authors ‘author copies’ which are sold to us at cost, and i didn’t order nearly enough. As a self-published author Amazon print on demand but when you hit a certain number they start holding stock so the book is available next day, thankfully I hit that within the first week so there was no delay on delivery. Lesson learned for next time!

My Amazon Experience
Where to start? They’re so huge that to NOT publish with Amazon would be a rookie error. It’s practically impossible to avoid them, and as a new author with very little audience I went all in with them. I registered for the Kindle Unlimited programme initially which meant that I couldn’t make the book available anywhere else. The number of ‘reads’ in the first week was over 1000 – of which I earned £2.34 from the ‘global fund.’

So what is more important? Sales or awareness? Tough call to be honest. I was thrilled that so many people had read it but could that have been sales? Would they have bought the book instead of reading it for free?

As soon as I could, i opted out of the Unlimited programme and made it available on Apple books and Google Play. The royalties for these sites is much higher than Amazon but of course they don’t have the reach. I’ve sold 4 copies on iBooks and 1 copy on Google play.

Would I go back into the Unlimited programme?
Maybe. I would rather people were reading it that it just languish at the bottom of the charts but I will be quite strategic about it. With Book 2 due out in February I’ll make it available throughout January so people can catch up. With the poor sales from Apple and Google I don’t see a way of avoiding Amazon so I may as well go all in with them again.

Anything else you’d change?
Yes, I’d be more particular about who I share advanced copies with. The beauty of StoryOrigin and Bookfunnel is being able to access a much bigger audience and build email subscribers but over 1000 copies of The Lie She Told were downloaded and no feedback was received at all, despite a robust follow up campaign. I think I went for the scattergun approach rather than being more niche – but lesson learned.

What next?
Off we go again! Book 2 is currently being edited and I hope to release it in February 2021. Here’s the ‘shout line’ for it

“When 3 worlds collide who will be the first to fall?”

I can’t say much more than that at the moment as it might all change when I get the edits back but needless to say it’s another crime thriller with DI (now DCI) Ziggy Thornes taking us on a complex and compelling journey as he tries to hunt down a killer who gets a little too close to home!

If you want to find out more sign up to the newsletter here >>> https://www.subscribepage.com/whatcatdidnext

You can join me on all the usual social media channels too;